A brief history of the Knights of Columbus 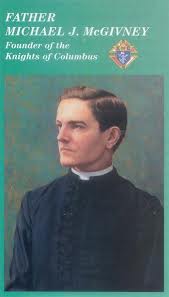 Thanks to the efforts of Father Michael J. McGivney, assistant pastor of St. Mary’s Church in New Haven and some of his parishioners, the Connecticut state legislature on March 29, 1882, officially chartered the Knights of Columbus as a fraternal benefit society. The Order is still true to its founding principles of charity, unity and fraternity.

The history of the Order shows how the foresight of Father Michael J. McGivney, whose cause for sainthood is being investigated by the Vatican, brought about what has become the world's foremost Catholic fraternal benefit society. The Order has helped families obtain economic security and stability through its life insurance, annuity and long-term care programs, and has contributed time and energy worldwide to service in communities.

The Knights of Columbus has grown from several members in one council to more than 13,000 councils and 1.7 million members throughout the United States, Canada, the Philippines, Mexico, Poland, the Dominican Republic, Puerto Rico, Panama, the Bahamas, the Virgin Islands, Cuba, Guatemala, Guam and Saipan.

St. Isidore Council was chartered on December 10, 1978 through the efforts of  Tony Kulka. It is named after St. Isidore’s Parish. The charter Grand Knight was John Nofs. There were 39 charter members.

The Council works closely with St. Isidore’s Parish and the surrounding communities of Macomb Twp., Shelby Twp., Clinton Twp., Utica, and Sterling Hgts., providing funds for various projects requested by these or any other communities in the area.  St. Isidore council currently has over 300 members and is adding members each month.